70 years after their internment during the second world war, UBC honored 61 Japanese-Canadian students whose educations had been interrupted, with honorary degrees. This special honorary degree ceremony was the culmination of a three-year process, led by Mary Kitigawa, to determine how best to address this dark park of UBC’s history. Along with the honorary degrees, the university also developed initiatives to educate current students about this part of the university’s past, and the UBC Library will work to preserve and bring to life the historical record of the period. 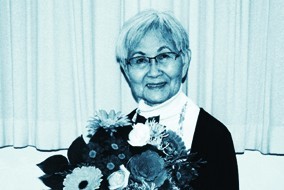