Breathe in your own Language

For many people, asthma is a disease that can be quite easily controlled through proper usage of medication and avoiding irritants. But if you don’t understand how to take your medication or what irritants to avoid, asthma can quickly become a very serious problem.

That was Dr. Mark FitzGerald’s concern when he realized that entire communities in Vancouver were not receiving the clear communication they needed. “Simply translating existing materials into other languages isn’t enough,” says Dr. FitzGerald, UBC Professor of Respiratory Medicine and Co-Director at the Institute for Heart and Lung Health. “We must take into account the attitudes and perspectives of the audience, which are sometimes quite different from those of the medical professionals who create the material.”

Rather than complain about the current material available, Dr. FitzGerald and Senior Health Evaluation Scientist Iraj Poureslami set out to create something better. Through focus groups within various ethnic communities they gained insights into what was missing in current communications and how to more effectively communicate and reach these groups.

The discoveries were surprising to say the least. Punjabis revealed that they are often inclined to hide their asthma because it’s associated with tuberculosis, a stigmatized disease in their culture. Chinese people expressed that they would be more willing to quit smoking if it is harming a loved one.

Armed with a stronger intercultural understanding, Dr. FitzGerald and Dr. Poureslami created ‘community videos’ in Punjabi, Cantonese and Mandarin featuring actual focus group participants as they acted out scenarios conveying messages about asthma management. Patients from these communities who watched the videos dramatically improved their inhaler skills and their understanding of the steps they needed to take to control their condition. The CIHR funded study showed significant improvement in patients ability to manage their asthma at the end of the study period.

“We’re not wasting their time with medical mumbo-jumbo,” says Dr. FitzGerald who sees asthma patients at Vancouver General Hospital’s Lung Centre. “We’re speaking in the patients’ own languages – not just linguistically, but culturally.” 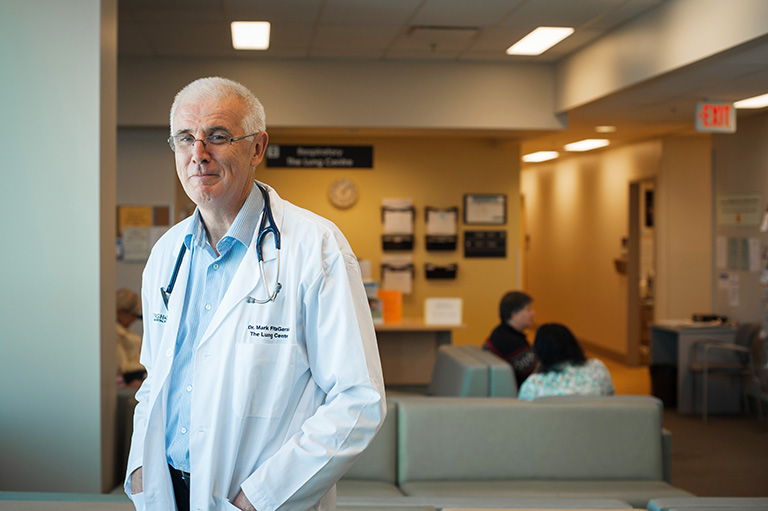 “We’re speaking in the patients’ own languages – not just linguistically, but culturally.”

RT @UBCNMP_unbc: Three NMP graduates have made Northern B.C. their home, pursuing careers as obstetricians/gynecologists in Prince George:…
about 9 hours ago.

We had a great time welcoming new communicators and re-connecting with our colleagues at the inaugural Faculty of M… https://t.co/hds8k0A82b
about 14 hours ago.

RT @picardonhealth: “It’s a privilege to work with and be an advocate for people whose voices are seldom heard" - @vivianwltsang of @UBCmed…
1 day ago.

Congratulations to @vivianwltsang who has received the @CMA_Docs Award for Young Leaders. “It’s a privilege to wo… https://t.co/tXfEJhRd3X
1 day ago.

Join #UBC experts on Tues, August 12th for a free online edition of MEDTalks: The Nature of Mental Health During th… https://t.co/Kt5YOajZFL
4 days ago.

RT @ubcspph: New story alert🚨 We talked to graduate students and faculty about #racism, the social determinants of health (#SDoH), and wh…
5 days ago.

#UBC’s Dr. Mel Krajden has been appointed the Order of B.C. for his significant contributions to fields such as Hep… https://t.co/EO3rR5IGvG
6 days ago.

RT @ubcnews: “The whole world wants this one at the exact same time and that is something that is going to require unprecedented amounts of…
6 days ago.