Students Learn the ABCs of Alphabet-making

Students Learn the ABCs of Alphabet-making

In North America, literacy is critical for employment and economic success, but in Africa, it could mean the difference between life and death. In Northern Ghana, for example, the 10,000 people who speak the oral language Nabit are unable to understand and influence essential health care, government and education services delivered in one of the country’s 79 other recognized languages; one that is both oral and written.

But two UBC students are hoping to give Nabit speakers the tools they need to gain better access to services—and to preserve their own culture. Those tools come in the form of vowels and consonants. Fourth-year UBC undergraduate student Robyn Giffen and PhD candidate Vida Yakong, a native Nabit speaker from Northern Ghana, are literally creating an alphabet and writing system for Nabit. Without written documentation, the language is at risk of going extinct, and with it, its unique culture.

“For the Nabit-speaking people, literacy means pride and security,” says Yakong, who, in 2007, launched Project GROW (Ghana Rural Opportunities for Women) out of her master’s research, an initiative that aims to create economic opportunities for women in rural Ghana. “It would mean the preservation of culture and history, and it would mean a greater ability to control and influence essential services and government.”

The 52-letter writing system will help to reduce the 45-percent illiteracy rate, and give people the basic ability to sign their own name (a feat currently accomplished using fingerprints, considered degrading), and eventually, learn English. “Nabit speakers hope to learn both written Nabit and English, so it was beneficial for the writing systems to be similar,” says Giffen. “The establishment of a writing system is essential—it is an important tool to help empower both women and men, not only because they will able to sign their own name, but they’ll be able to read and write, a skill that should be considered a human right.” The idea for Giffen’s URA project was sparked by doctoral research by Cindy Bourne, PhD candidate, Faculty of Education, who — through her work with Project GROW and research on adult literacy in Northern Ghana — identified the desire and need for a writing system for Nabit. Robyn will be continuing the project as she begins her Master’s degree at UBC’s Okanagan campus this summer, 2013. 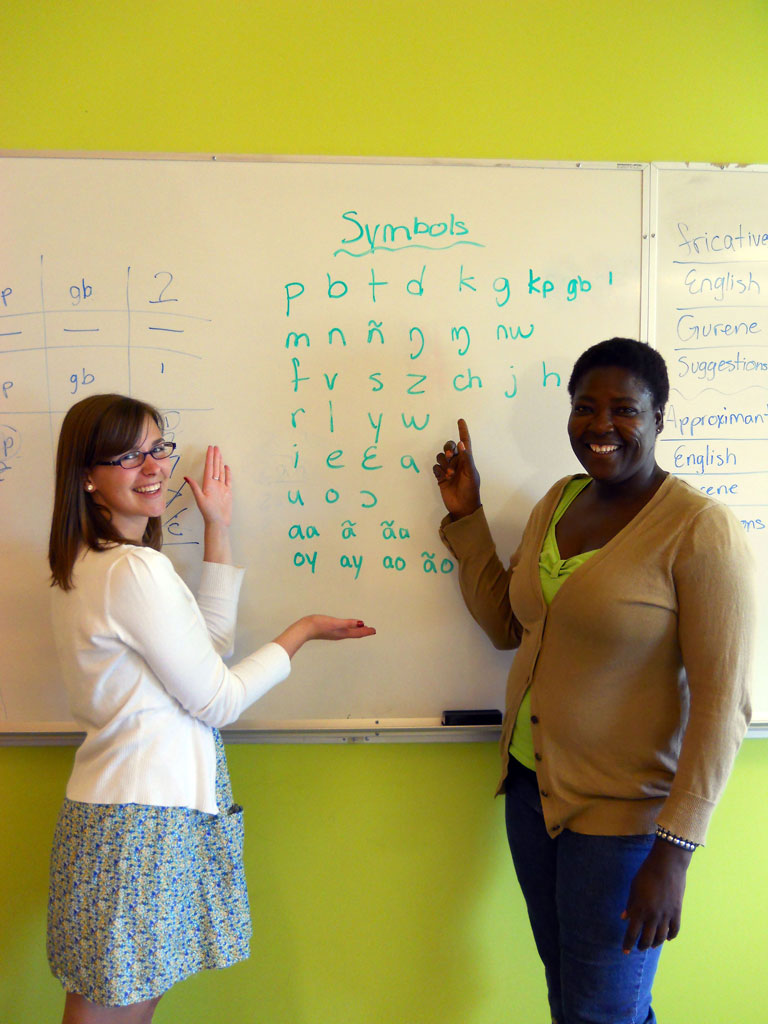 In Africa, literacy can mean the difference between life and death.

Meet UBC Interdisciplinary Studies alumna Ricki-Lynn Achilles, who is working with Terrence Sutherland, of the Kapu… https://t.co/4BMVqFUR6p
1 day ago.

A UBCO study led by Liber Ero postdoctoral fellow Clayton Lamb and Adam Ford, a professor in UBCO’s department of b… https://t.co/xZDrakdfv1
4 days ago.

RT @ubcequity: In response to recent events, we’re inviting BIPOC students to join us on July 8 for an inclusive space where we can process…
4 days ago.

RT @ubcrec: Starting today, many #UBC Sport Facilities will re-open with limited or reduced activities to accommodate guidelines of local h…
8 days ago.

RT @ubcequity: This Pride, let's honour the work of QTIBIPOC activists. Join us on June 29 for a screening, discussion & intersectional ref…
29 Jun, 20